NCIC Sensitizing Media Ahead of 2022 General Elections and beyond.

The media is a key stakeholder of the National Cohesion and Integration Commission and the peacebuilding process in Kenya. Hence, the Commission is sensitizing journalists and bloggers across the country on conflict sensitive reporting, hate speech and ethnic contempt ahead of the 2022 General Elections and beyond.

On 11th and 12th August 2021, the NCIC conducted a sensitization forum for 20 Journalists and bloggers from various media houses in Kericho County. Some of the topics tackled included unpacking hate speech, incitement to violence laws and freedom of expression, the role of media in countering political intolerance, electoral violence and fake news.

NCIC Deputy Director Corporate Communication, Olive Metet encouraged the journalists to embrace objective reporting in ensuring peaceful coexistence among Kenyans. “The internet offers the possibility of every user to create, publish and consume media content but wrong use of social media platforms can cause conflict and disagreement among people” NCIC Senior Social Media Investigator, Wycliffe Mwatu reiterated. In solving disputes related to hate speech and incitement to violence, NCIC plays a key role by reaching out to various groups of people and educating the public on the importance of enhancing peace, said Jackson Mwikamba, Senior Legal Officer.

NCIC Officials paid a courtesy call to Kericho County Commissioner, James Nyamwamu who shared challenges to peaceful co-existence in the County, possible solutions and areas of partnership. He lauded the Commission for rolling out targeted programs ahead of the elections, saying such programs should be a continuous process to inculcate national values. 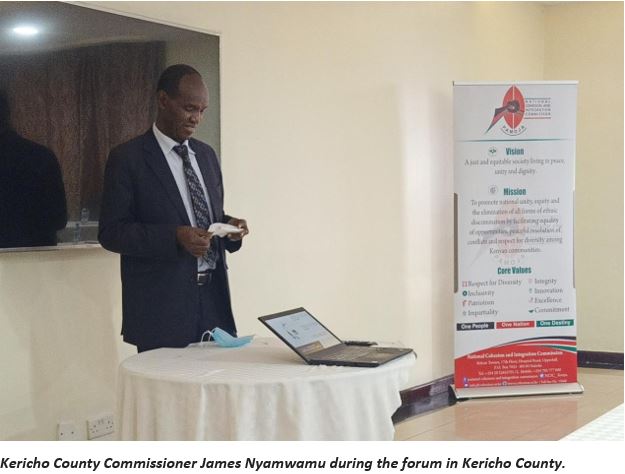 Kericho County borders Kisumu, Bomet and Nakuru counties and has the largest share of Mau forest that has been a center of conflicts and violence in the recent past.

NCIC Development partner GIZ supported the activity which also brought on board key partners like the Independent Electoral and Boundaries Commission (IEBC), Office of the Registrar of Political Parties (ORPP) and Media Council of Kenya (MCK).

The NCIC held similar engagements in Narok and Nakuru in April and June this year and plans are in gear for Kisumu, Nandi, Kakamega among other regions. So far, over 70 journalists have been engaged and by the end of the exercise, over 100 journalists and bloggers will have been sensitized ahead of the elections. This is part of the engagements that the Commission conducts throughout to achieve its mandate. 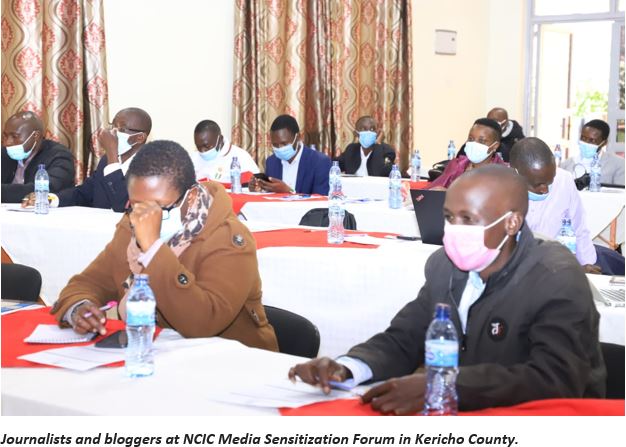 The Commission aims to enhance understanding of NCIC’s mandate especially on what entails hate speech as well as the NCIC Roadmap to Peaceful 2022 General Elections dubbed Election Bila Noma.