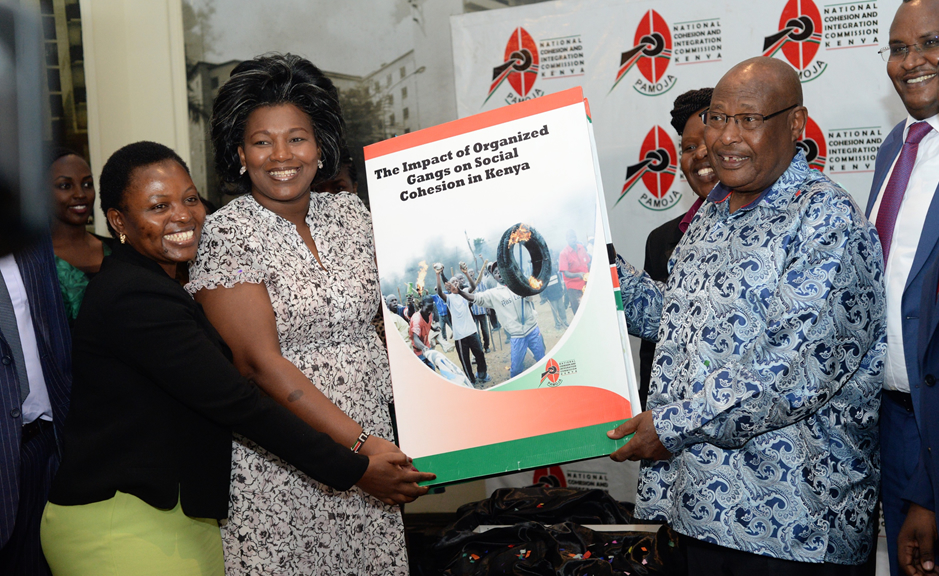 The Commission has launched a report titled The Impact of Organized Gangs on Social Cohesion in Kenya. The report is based on research effected by the Commission between November 2016 and June 2017. The launch was graced by NCIC Chairperson Hon. Francis Ole Kaparo, Commissioner Dr. Roba Sharamo, Commissioner Dr. Joseph Nasongo, Director, Amnesty International Houghton Irungu and Chief Administrative Secretary Ministry of Public Service, Youth and Gender Hon. Rachel Shebesh as the guest speaker.

The report was carried out as a result of NCIC’s concern over the rising levels of political radicalization and re-emergence of organized criminal gangs wreaking havoc in different parts of the country before, during and after the electioneering period.

Kenya’s political system remains highly centralized and based on ethnic politics. Despite decentralization of power to the counties through devolution, violence and insecurity recurs as part of Kenya’s election cycle leading to divisiveness and mistrust in communities around the country. Consequently, Kenyans continued to experience repeated violence before, during and after the past general elections.

15 counties were sampled, with majority of participants agreeing that organized gang activity deteriorates social cohesion at several levels. Dr. Sellah King’oro, Assistant Director NCIC and the lead researcher presented the findings, highlighting that 90% of organized criminal gangs in the country are financed and deployed by politicians. According to the report, majority of gang members range between the ages of 15 and 35 years with some gang members as young as 11years.

Gangs create fear thus dividing communities along political and ethnic lines. Through the report, NCIC stresses the need to eradicate gang activity in the country to achieve national unity.