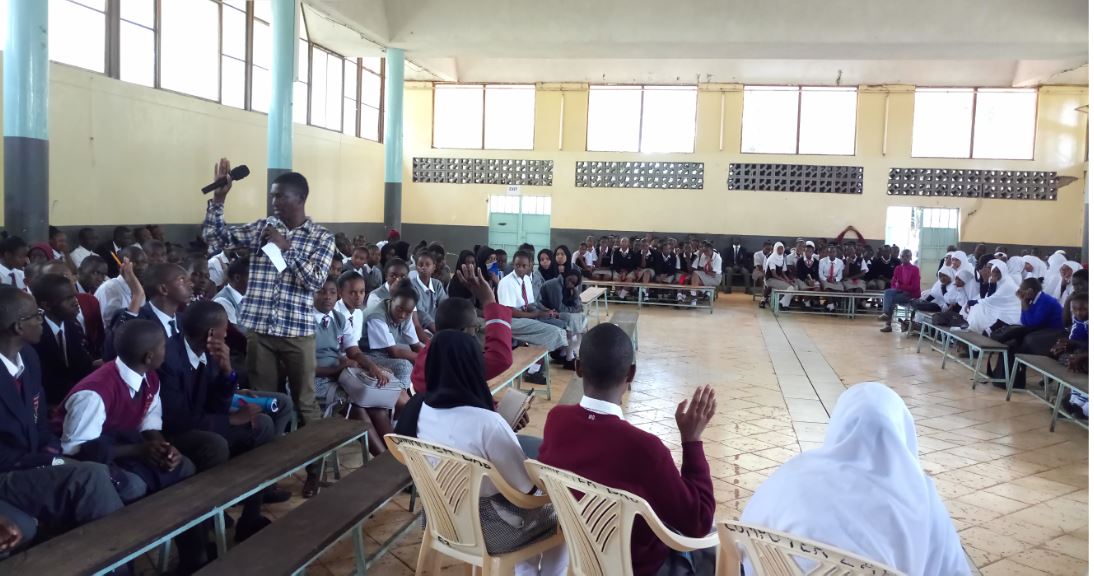 The Commission participated in a Peace Symposium at Dagoretti High School on 16th March 2019. The objective of the symposium was to mentor and empower peace agents in different schools. The meeting brought together nine high schools, a total of 437 students- 162 girls and 275 boys. Ms. Halima Shariff and Ms. Rahima Aden of CEAD represented the Commission. While addressing the students, Ms. Halima urged them to embrace national values that will help them in their lives. She highlighted the effect of the post-election violence and how it disrupted education in different parts of Kenya in 2007/2008. She encouraged the students to spearhead concept of peaceful coexistence. She stressed on the need for interaction between different communities, which in turn will lead to a more cohesive and integrated society. Mr. Peter Wafula, Dagoretti High Amani Club Patron, emphasized that the clubs are teaching students to be a voice of reason. He stated that he would liaise with patrons from different schools to organize a national debate for Amani club that would be held in different Counties from time to time. During the discussions, students from the various schools spoke on topics ranging from discrimination to creation of peaceful coexistence in schools. The students’ panelists noted that peer counselors and Amani club patrons should step in and resolve conflicts that arise among the students. Highridge Girls encouraged the use of official languages in schools that is English and Kiswahili. Nairobi Muslim Academy noted that since the inception of peace corners, the students have learned how to constructively resolve conflicts by becoming more equipped with skills that promote peace and human dignity at all levels of interactions. Lenana School pointed out the need to find a common ground between the students and the teachers in order to solve disputes. The students also noted how uniforms enhance uniformity; teachers were urged to listen to the views of all groups of students and take their opinion and incorporate it in administration