A mission to reconcile the Borana and Aulian Communities 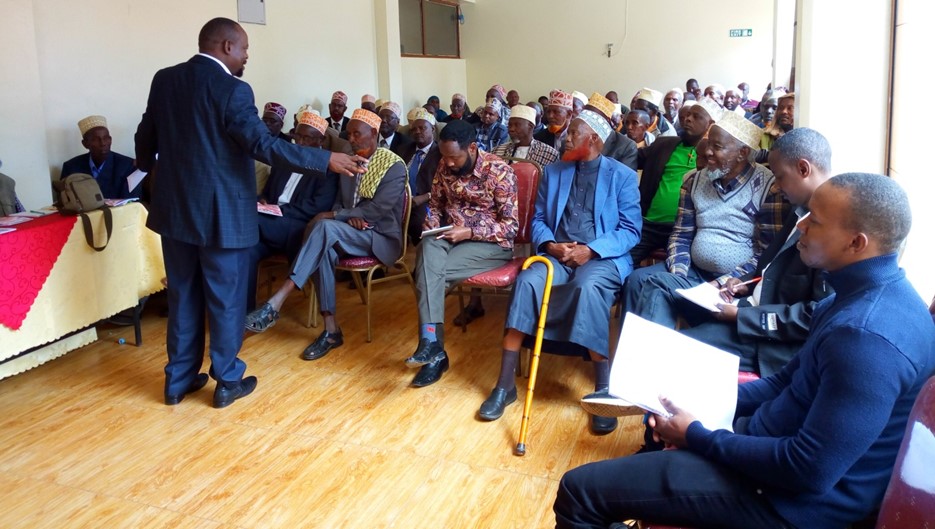 In an effort to end skirmishes in Eldera between Borana and Aulian communities residing within Isiolo and Garissa counties, the Commission together with the office of the County Commissioners in the respective counties conducted peace meetings that has resulted to an end of the hostilities. The dialogue forum, held on 28th and 29th November 2018, at Beisa Hotel, Nanyuki, Laikipia County was attended by 50 elders (25 from both Garbatulla and Lagdera sub-counties).

The peace meeting was held to assist the return of evicted families where the Lagdera community leaders and members passed their message of reconciliation asking the evicted persons to return to their homes.

Mr. Kyallo Mwengi, Assistant Director, Complaints, Legal and Enforcement (CLE) Department, NCIC said one of the recommendations was to convene a joint elders’ peace dialogue in a neutral ground to discuss on ways of sustaining the peace.

He noted that the best way to avert conflict between communities is to call for dialogue as it is the best solution for long-lasting and locally generated peace.

The cessation of hostilities meeting was held at Lagdera sub-county led by Dr. Joshua Chepchieng, County Commissioner, Garissa County. The meeting’s objective was discuss ways to reduce the rising tension, after the Garbatulla community lost one of their young men attacked by the Lagdera-Aulian community.

Mr. John Ondego, County Commissioner, Isiolo County while addressing the Elders present at the forum encouraged the leaders from both communities to ensure they inform their members of the proceedings and the outcome of the dialogue meeting so as to own the resolutions.

He reiterated Mr. Kyallo’s sentiments on the National governments development plan that are meant to benefit both the Garbatulla and Lagdera communities but gave a caution that this may not benefit them if violent conflict continues.

The elders concurred to assist in solving the small conflicts between the communities so as to enable the security personnel focus on the major security threats facing the county of Garissa involving the shiftas, violent extremism, radicalization and terrorism from Al-Shabab and Al-Qaeda.