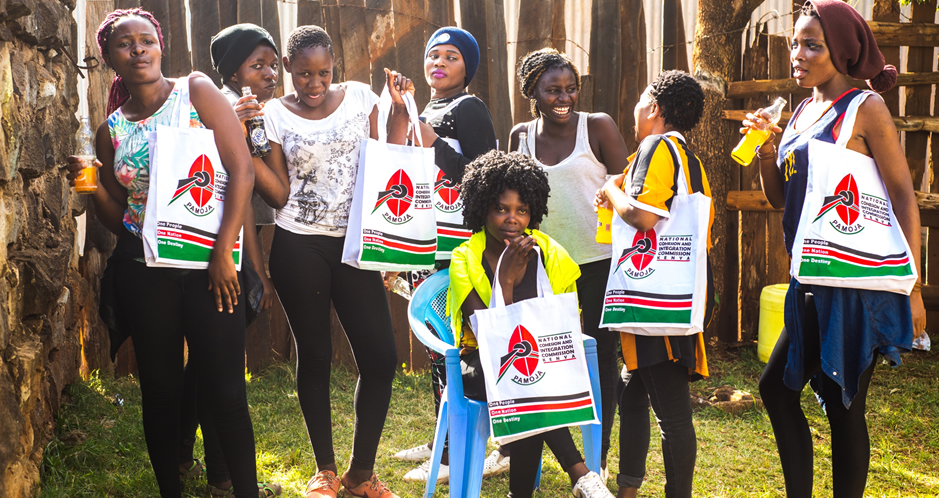 NCIC gift bags presented to young women during the International Women’s Day in Kibera on March 8, 2018

A crowd of motivated and rejuvenated women of all ages and ethnic backgrounds, from the informal settlements of Nairobi, gathered in Kibera to celebrate their achievements as a gender, during the International Women’s Day on March 8th. Many of these brave women have heeded to the call of peace ambassadorship, echoing dialogue, resilience and tolerance in their communities.

Themed ‘press for progress’ this year’s event was facilitated by Polycom Development Project in conjunction with the National Cohesion and Integration Commission. The event was aimed at celebrating peace ambassadors in the grassroots and applauding them for the great work they are doing in uniting the nation. Through ambient African songs and dances, the peace ambassadors were lifted to the mood of celebrations dancing to the tune of peace and cohesion.

The forum provided a platform for women to discuss their role as peace builders and the contributions of The National Cohesion and Integration Commission in ensuring a united and integrated Kenyan society. Highlighting the courses and solutions to conflict, it was clear that as women, focusing on similarities and putting differences aside would serve as a foundation for inclusion in decision making processes. NCIC team was represented by Ms. Olive Metet, Ms. Regina Mutiru, Ms. Nancy Mulu, Ms. Linda Mumo and Ms. Faith Mutegi.